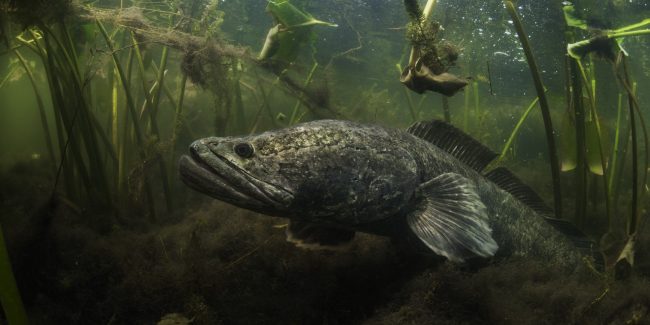 Originally from China, snakehead is a voracious predator that feeds on native species of fish and other Chesapeake aquatic wildlife. Fortunately, these invasive species taste delicious! From fried to broiled, in tacos or a poor boy, the versatility of this fish has local chefs excited. If you haven’t tried it yet, order it at your local seafood restaurant or pick some up to cook at home. Check out our Snakehead Recipes 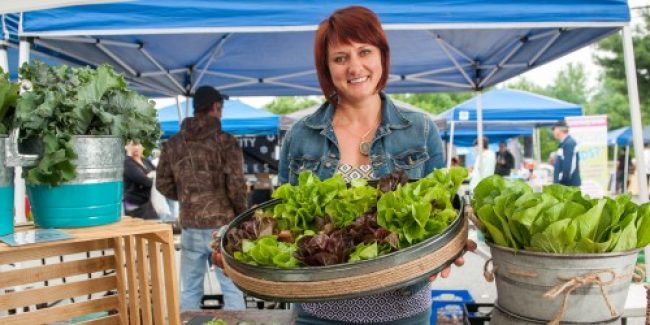 It’s time to take the Buy Local Challenge! Governor Larry Hogan has declared the week of July 17-25, Buy Local Week in Maryland. Celebrate Maryland food, farms and watermen by including one local item in the your daily meals. July is the time of plenty in our state. Sweet corn, peaches, melons, greens .. all are coming in from local farms. Local cheeses, local wines, beers, spirits … all are ready to enjoy. The Chesapeake, the nearby Atlantic and tributaries are swimming with sustenance. Try a blue catfish filet and you’ll be supporting a local waterman. Slurp a farmed oyster with a bit of locally made hot sauce! You get the idea. Have fun! Take The Buy Local Challenge. 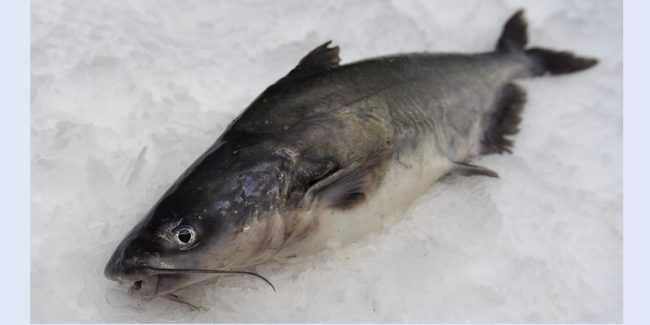 Since they were first introduced into the Chesapeake Bay, the blue catfish population has increased dramatically. This invasive species was first introduced into our waters during the 1970s and is now prolific throughout the Chesapeake Bay watershed. In 2018 there was an estimated 500 million pounds of blue catfish in the bay. Due to lack of awareness among chefs and consumers, local watermen and processors have not been able to use this species at a high enough number to mitigate their impact on other Chesapeake Bay mainstays like blue crab, rockfish, and oysters. Catching and eating blue catfish is one tasty way to reduce the numbers of this invasive fish. Blue catfish caught from the Chesapeake Bay is often compared to rockfish in taste and texture and can be cooked in a variety of different ways such as frying or baking. Try out one of our blue catfish recipes in the link below! Blue Catfish Recipes. 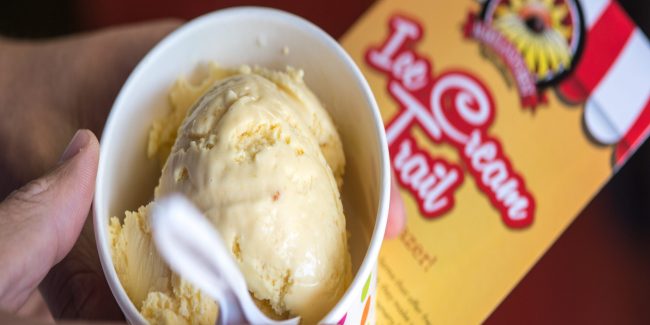 The Maryland’s Best Ice Cream Trail’s 2021 season officially begins on May 28, and will run through September 30. Now in its ninth year, the Ice Cream Trail is designed to promote the state’s dairy industry, and has become increasingly popular, drawing participants from across the state and beyond. The 2021 Ice Cream Trail features 10 on-farm creameries across the state that produce and sell their ice cream directly to consumers. The trail stretches more than 290 miles from Washington County in the west to Worcester County in the east. The purpose of the trail is to increase the public’s understanding of dairy farming and to highlight the important contributions of Maryland’s 325 dairy farms, which according to the USDA’s 2017 Census of Agriculture accounted for more than $174 million in sales in 2017. View the 2021 Ice Cream Trail Passport 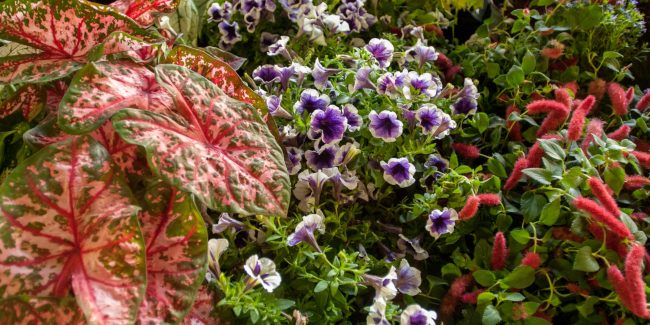 Maryland is home to a thriving number of flower growers and ornamental plant producers. Cut flowers brought in $1.9 million into the state’s ag economy in 2017, the last Ag Census. There are many options for beautifying your home. Including local plants in your plans benefits you, your neighbors and the state! Look for plants and flowers at farmstands and farmers markets. For cut flowers, go to here. For nurseries and garden centers, go here. For gardening tips from the University of Maryland, go here. 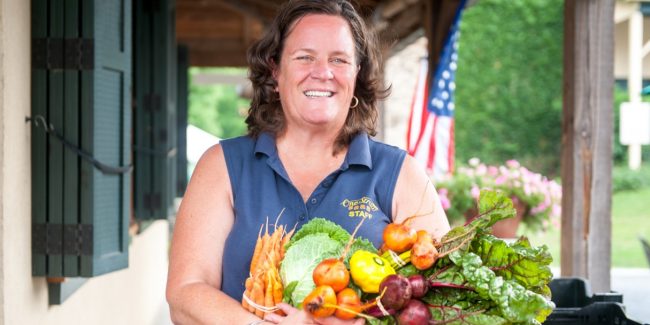 Join a community supported agriculture (CSA) farm and support local farmers while receiving healthful, fresh produce all summer long. CSA members pay an up-front subscription to farmers in return for a share of the season’s harvest, which is usually provided weekly. For convenience, many CSAs deliver to central locations for pickup closer to subscriber’s home or work on a designated day of the week. Search Maryland’s Best web site for a CSA farm near you.  Local Harvest – Tips for Potential CSA Members   List of CSA farms on Maryland’s Best 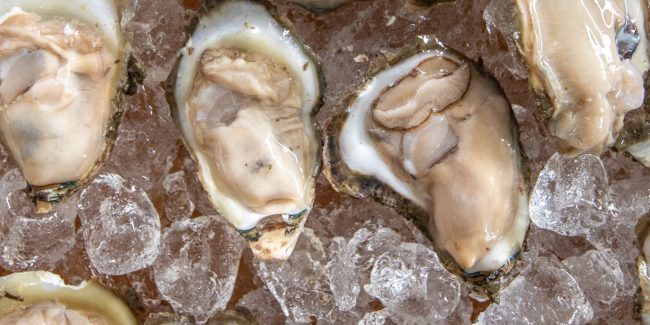 Maryland oystermen and oyster farmers are pulling up the bounty of our waters this season. Try them shucked in stews and fried. Or, enjoy their raw briny essence. According to the United States Department of Agriculture’s National Statistics Service Census of Aquaculture, Maryland farmers sold $3.5 million in oysters in 2018. The National Oceanic and Atmospheric Administration reports that in 2018 Maryland watermen received $6.7 million in sales of wild caught oysters. To find local oysters to enjoy at home, select this link to our Direct to Consumer Map To find a seafood restaurant with oysters select this link to the Maryland Crab & Oyster Trail In the video below learn how to fry Maryland oysters. 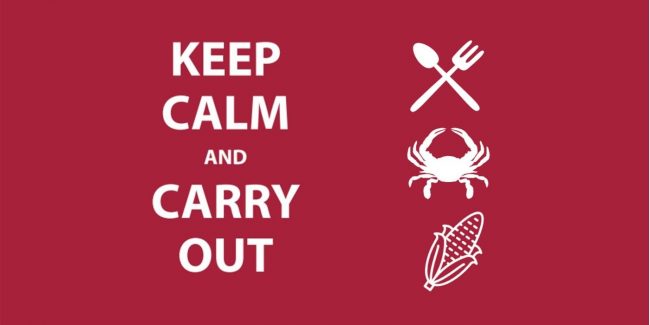 Keep Calm and Carry Out

The “Keep Calm and Carry Out” social media campaign is a partnership between MDA, the Maryland Department of Natural Resources, the Maryland Office of Tourism and the Maryland Restaurant Association to promote the many restaurants across the state that continue to offer carry-out and delivery services. For a full list of these restaurants, please visit:  visitmaryland.org/article/restaurants-offering-carry-out 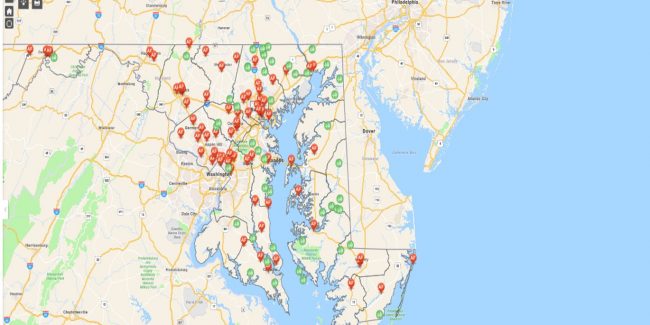 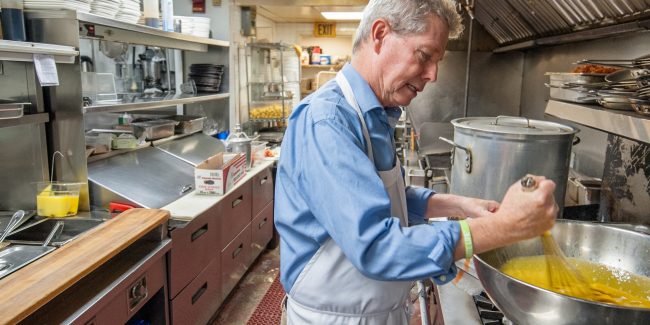 The holidays are here! While seasonal celebrations will be smaller this year, it is still a perfect time to include local seafood and farm products on your table. “This is a holiday season unlike any other, and it is more important than ever that we continue to support the men and women who have worked throughout the pandemic to provide fresh, local food products,” said Secretary of Agriculture Joe Bartenfelder. “There is plenty of local meat, seafood, dairy products and hardy winter vegetables available for your holiday meal. Visit MarylandsBest.net to find local products near you.” “It truly is the most wonderful time of the year, not only because of the holidays, but also for fresh Maryland oysters – which are at their best right now,” said Natural Resources Secretary Jeannie Haddaway-Riccio. “While this has been a tough year for many of us, we can support the men and women in our communities who produce and catch our food while celebrating with our families by choosing locally grown and locally caught items this holiday season.” “Chesapeake cuisine makes Maryland a very special place to be for the holidays,” said Chef John Shields, author of several books on the region’s cuisine. “Think local […]

Maryland farmers offer some of the freshest holiday trees available, including the popular Fraser fir and Canaan fir as well as the Douglas fir, Concolor fir, Scotch pine, White pine, and Blue spruce. According to the 2017 Census of Agriculture for Maryland, there are more than 185 Christmas tree growers in the state with nearly 2,200 acres in production. Nationally, there are more than 15,000 Christmas tree growers in the U.S. and the fresh-cut Christmas tree business generates nearly $377 million in sales, according to the latest agriculture census. Not only do real trees look and smell amazing, they are also a renewable and recyclable resource that keep unwanted waste out of our landfills. Artificial trees are often petroleum based, imported from overseas, and do not biodegrade, so they eventually end up laying in landfills forever. In contrast, real Christmas trees can be recycled at the end of the holiday season, often chipped into mulch that returns important nutrients to the earth. While growing, Christmas trees absorb carbon dioxide and other gases and emit fresh oxygen. When growing in an open area, a 3-inch diameter Douglas fir can reduce atmospheric carbon by 23 pounds and intercept 102 gallons of stormwater […] 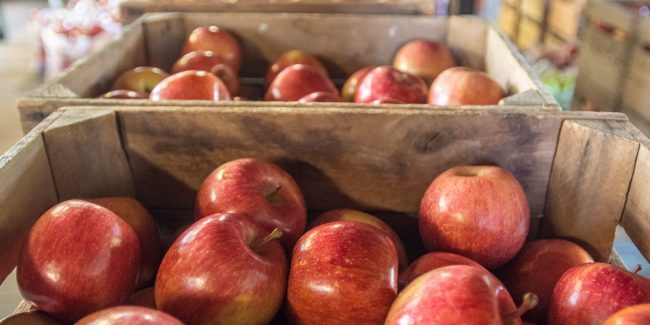 The work of Maryland’s apple growers is paying off for you now! It’s Apple Month in Maryland! Varieties that range from Crispin, big golden green globes of sweetness, to the Stayman, with its tart and spicy flesh are ready for the eating. All these types of apples and the growers who produce them have stories to tell. The Stayman, for example, was developed in 1876 in Leavenworth County, Kansas. Maryland even has its Antietam Blush, a project of the University of Maryland. One of Maryland’s apple growers, Robert Black, was honored this year as Apple Grower of the Year by American Fruit Grower magazine. Search our website for Maryland apple orchards and try out the Maryland Apple Promotion Board’s website. 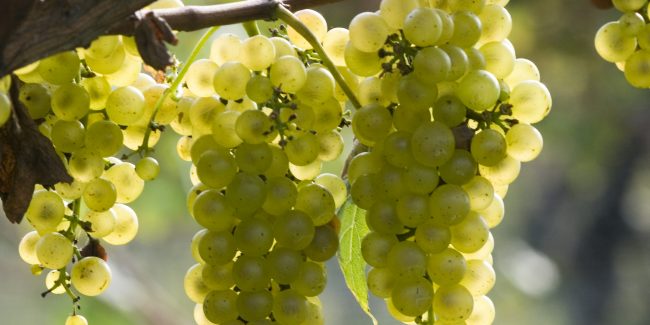 Maryland’s vineyards and winemakers offer a wonderful way to celebrate our great state! Curbside service is widely available and seating to provide social distancing as well. Learn about our wineries and cider producers here: https://marylandwine.com/wine-trails/ For pairings of Maryland wine from Governor Hogan’s 2019 Buy Local Cookout, check this cookbook: https://mda.maryland.gov/Documents/2019-BLC-Cookbook.pdf 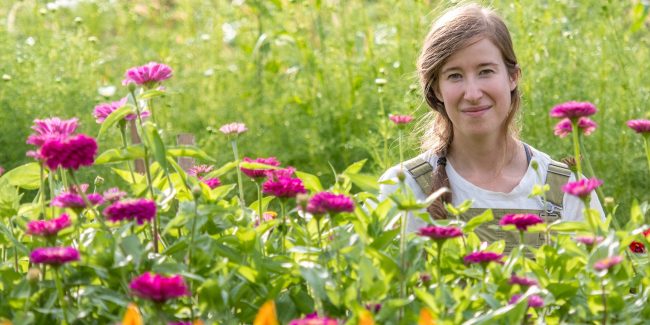 Keep local beauty in your home 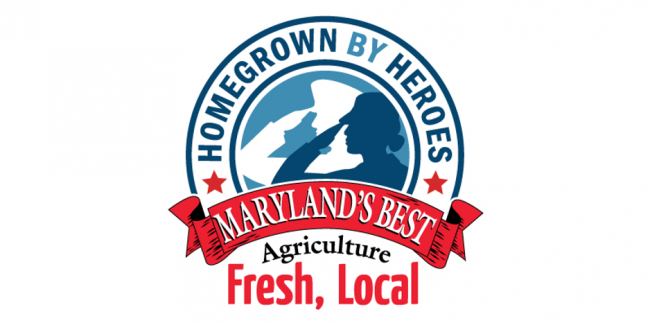 The Maryland Department of Agriculture—in partnership with the Farmer Veteran Coalition and MidAtlantic Farm Credit— has adopted a new logo to for the Maryland’s Best Homegrown By Heroes program. Working with the Farmer Veteran Coalition, the new Maryland logo features refreshed colors and, most notably, the inclusion of a female service member. In an effort to support Maryland veterans who have returned home to the farm, the Homegrown by Heroes program provides unique signage to identify and promote products at farmers’ markets and local groceries grown by local veterans. “I am proud that we have this program in support of our state’s military veterans,” said Agriculture Secretary Joe Bartenfelder. “These brave men and women have served and protected our country, and they deserve all the support we can give. I encourage all Marylanders to seek out products with the ‘Homegrown By Heroes’ label.” The department’s family of Maryland’s Best logos was created to identify and promote products as locally grown or produced. The addition of the Homegrown by Heroes logo expands on this effort and recognizes a small but important group of farmers who have served honorably and returned to the land. The Farmer Veteran Coalition was granted the honor […] 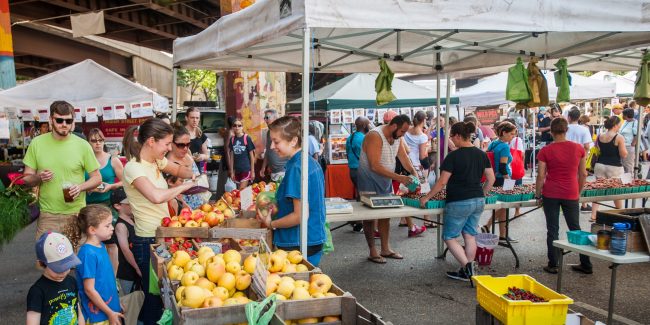 Farmers’ market season is just beginning and we have a directory that will tell you where you can get all your farmer’s market needs! Visit a farmer’s market near you to pick up local fruits & vegetables, meats, eggs, cheeses, ice cream, wines and much more!  Check out our 2020 Directory below to find a market near you, and thanks for buying local! Maryland Farmers Market Directory 2020 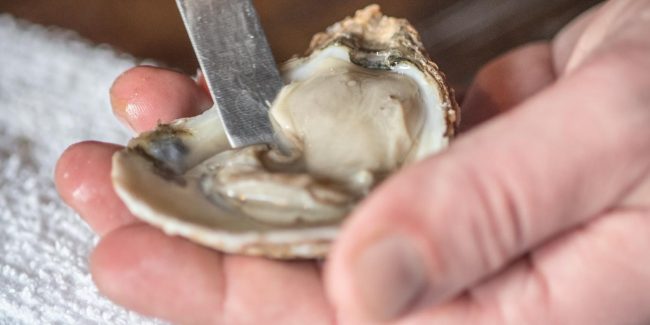 One of our most intriguing foods, oysters are like fine wine, its flavor a mirror of its habitat. Move a grapevine, you get a different wine. Oysters are same. Maryland oysters are sweet and delicate A result of merroir, the content and characteristics of the sea in which it grows, the Chesapeake haunts every slurp or savor you have of an oyster taken from its tributaries. Check out the links below to learn more about Maryland oysters and the locations where you can purchase them. Find restaurants serving local oysters here: www.seafood.maryland.gov/oyster-pledge Explore the seafood trail: www.visitmaryland.org/article/crack-shuck-savor-maryland Try some oyster recipes: www.seafood.maryland.gov/category/oysters/ Learn about the Oyster Recovery Partnership: www.oysterrecovery.org/ 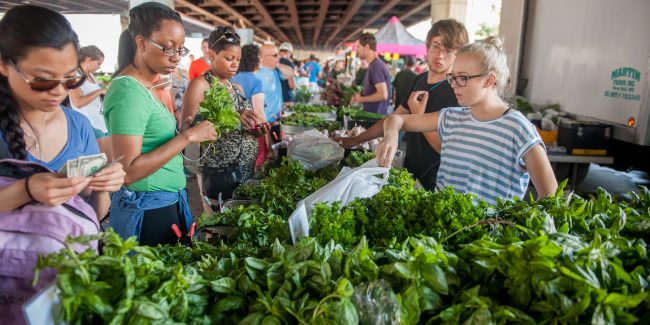 The Farmers Market Nutrition Program is funded by the U.S. Department of Agriculture supplemental nutritional grant and provides checks to low income senior citizens and participants of the Women, Infants and Children (WIC) program. Theses checks can be redeemed to purchase fresh fruit, vegetables, and cut herbs at local farmers markets.   Find the nearest farmer’s market where FNMP checks are accepted! 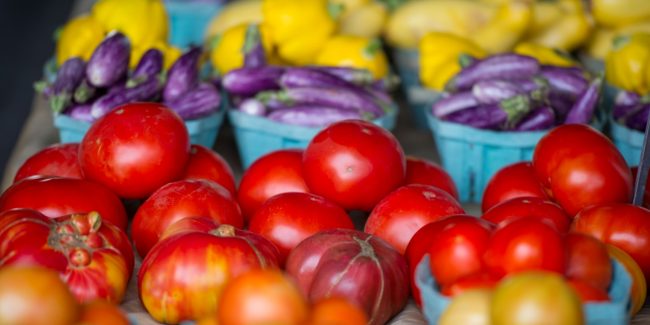 From Cucumbers, watermelons, and apples to strawberries and sprouts, Maryland farmers produce a wide variety of fruits and vegetables. Check out the link below for fruit and vegetable seasonality guides to find when your favorite produce is in season. Maryland Fruit and Vegetable Seasonality Charts